Chief Cantrell served the City of Mesa, Arizona for over 21 years and as the Chief of Police in San Luis Obispo since January 2016.  Her final assignment with Mesa PD was Assistant Chief of the Administrative Services Bureau where she oversaw fiscal, supply, fleet, police information technology, communications, records and the forensics lab.  Chief Cantrell also served as the Deputy Chief of Special Operations, as a Patrol Commander, Internal Affairs Lieutenant and Sergeant, Gang and Patrol Lieutenant, a Motor officer in Traffic, and several other special operations positions.

Chief Cantrell believes that the police exist to make lives better.  She developed a deep-rooted history of community engagement and participation while in Mesa, chairing the Diversity Team, serving on the NAACP Legal Redress Committee, the Muslim Police Advisory Board, and as the chair of the Human Rights Forum in Mesa.  She  continued that tradition in San Luis Obispo by starting the Police and Community Together (PACT) committee. PACT was awarded the Anti-Defamation League Sherwood Prize in March 2019 for combatting hate.  Chief Cantrell serves on the International Association of Chiefs of Police (IACP) Professional Standards, Ethics, and Image committee. She is the Region 12 Representative for the California Police Chiefs Association (CPCA),served on the Changing the Narrative Committee, and is a Co-Chair of the Women Leaders in Law Enforcement Committee. In 2018, Chief Cantrell was selected as a 24th District Congressional Woman of the year.

Chief Cantrell holds a Bachelor’s Degree in Education and a Master’s Degree in Administration from Northern Arizona University. She is a graduate of Northwestern University Police Staff and Command School and the International Association of Chief of Police Leadership in Policing Organizations Training. She is also an adjunct faculty member for Northwestern University teaching policy, contemporary policing, executive image, internal conflict, and strategic planning.

Learn more about a non-sworn position

Ask a recruiter a question 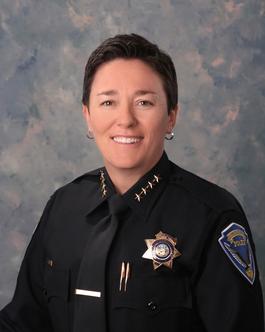