Rancho in 1850 from General Vallejo and sold

Captain Robert B. Waterman an undivided

Mr Ritchie was accidentally killed and

Waterman was named attorney-in-fact to

In 1856 Captain Robert H. Waterman plotted and laid out the townsite, founded and named the City of Fairfield after Fairfield, Connecticut where the Captain was raised.

Formerly a clippership captain who had sailed around the world five times, Waterman decided to settle down in Suisun Valley with his wife, CORDELIA.

In 1903 when Fairfield was founded, T.S. Linehan became the town Marshal, followed by Bob Oliver, Jack Jarvis and Ed Buker.

1920-1925 JACK JOHANNSON was named as the First Chief of Police of Fairfield.

1925-1930LEO SWEENEY became the second Chief of Police. Sweeney left Fairfield to work for the California Highway Patrol. He subsequently was drafted and died during the Japanese attack on Pearl Harbor, Hawaii in 1941.

In August of 2017, Randy Fenn became the newest Chief of Police

Ask a recruiter a question 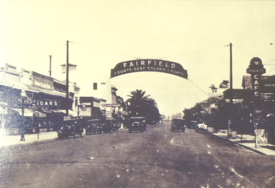 Learn more about a non-sworn position.